Born 1871 in Germany, John Sedler immigrated and became a naturalized U.S. citizen in 1896. He purchased this property in 1910 and was a merchant, owner of Owl Drug store (and salon depending on era). 1912 advertisements for the store in the Arizona Republican bragged “free motorcycle delivery.” A map by O.A. Turney of Phoenix shows “Sedler’s Addition” bounded by 12th to 13th Street and Roosevelt to Diamond Streets. Built in 1912, John Sedler’s house was set on 5 acres and looking out on alfalfa fields to the south of Roosevelt Street. “We stuck out like a sore thumb” said John Sedler’s daughter, “no sidewalks, nothing.” The house occupies the northeast corner of 12th Street & Roosevelt. 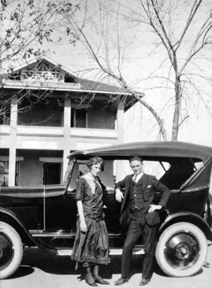 Architecturally and historically it is significant by its age and massive proud manor. The house draws directly from 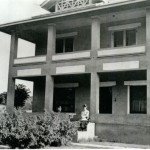 the “Bungalow Style” while using detailing more common to Colonial or Mission, blending into a Territorial vernacular developed in this region. This blend of styles and its exceptional size relative to the “Bungalow Style” (typically one story) makes the building architecturally significant. The house originally used a solar hot water system on the roof . The Sedler’s resided there until 1948, when Earl Brown and his family made it their home. In 1971, Alwun House founders purchased the dilapidated property and began their rehab & retrofit efforts.

The Sedler House, aka Alwun House was placed on the Arizona State Historic Preservation Office’s Inventory of Historic Properties, on May 11, 1993; making the house eligible for National Historic Registration, On Feburary 9, 2005 the City of Phoenix placed the Sedler House on it’s list of registered historic properties for it’s individual significance. 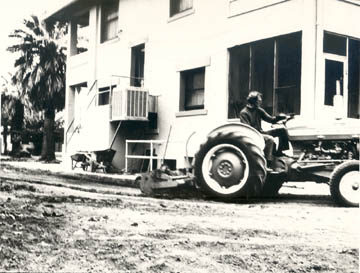 Founder Kim Moody had a vision to create one place where artists of all media, come together to explore and refine new works. By serendipitous opportunity in 1971, they acquired the historic Sedler House in partnership with Laurence Vanderbeek, a perfect homestead to grow this vision. 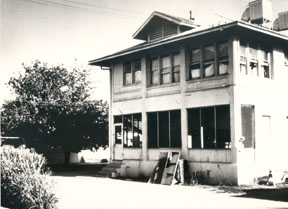 Alwun House grew as the first nonprofit alternative|contemporary art gallery in downtown. The central floor became an art gallery, the basement produced multi-media theatre producing such notable productions as “Games I’ve Played While Waiting for the Messiah.” A more practical “Food for Thought,” demonstrated the benefits of growing your own food, with the cyclic slogan; “dig it, plant it, grow it, eat it.” Alwun hosted luminaries like Marcel Marceau and Mummenschanz, Baba Don Gong meditations, Latin Peñas with Alberto Rios, first “Performance Art” to be seen in Phoenix and other eclectic events. A popular series of the seventies was “Heartsong,” a heartfelt music and poetry reading series. 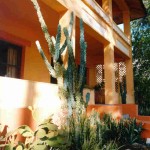 At 30, the reorganized Alwun House Foundation’s first major accomplishment was reacquisition of its house. Dana Johnson applied for an Arizona State Historic Preservation Office grant and awarded $48,000 matched with community contributions the House was reacquired. This period brought the return of the Coffeehouse series, showcasing another generation of poets and musicians. Becoming a signature fundraising event on its own, The Exotic Art Show, annually features over 60 artists, a mix of media, with uninhibited and provocative art, opens with a Valentine’s “Phantasmagorical Spectacular.”

Now approaching an expanding 40th Season, Alwun’s labeled with titles such as; “legendary,” “institution.” Downtown’s first art gallery, that grew to shape the Arts District Overlay, has been identified as a cultural node in the area, and a long standing community asset. Alwun Staff and volunteers look forward to the growth this new millennium promises as the one place where artists of all media, come together to explore and refine new works in Phoenix.