A blow-out thriller stage show, with live jazz music, crowds costumed for cathartic revelry in spirited costumes contest. When doors creak open at 7pm, performances have already begun with Spooky Kool* whose entrancing jazz performs as guest & ghouls arrive. Followed up with Ignite Collaborative conjuring up a witches’ coven full of blood, creepy gore and ritualistic sacrifices. Then the evening takes a kinky twist as WTQ “What The Queer” takes the stage and goes dragalicious with all-out monstrous queeriest creations ever to hit Alwun’s stage. The bizarre antics of WTQ “What the Queer” has earned them best Alternative Drag Troupe by New Times. WTQ will drag you into the scariest yet sexiest fantasies. You will dare to witness the most outrageously dark bizarre performances. Guaranteed to make your spine (and other organs) shiver. WTQ is hosted by Vera Saucy; performers: Rosetta Stoned, Quinetta Rose, NiiMare, Yoyo BlackFire, Jeena Doucure, Chianti Thirst, Dr. Queer Medicine Woman, and more!

*Spooky Kool is one of the valley’s preeminent jazz bands in the valley. Fresh after the release of their new album “I AM” Featuring Gabriel Bey who continues to perpetuate the movement of performing spontaneous Original Music (OM) based on the atmosphere created by the audience. The experience is both reflective and engaging. Musicians: Phil Janzen ~ Drums, Sandra Bassett ~ Keyboard & Vocals, Jack Schaar ~ Sax, Ross Covington ~ Bass, Pete Mello ~ Guitar, Gabriel Bey ~ Trumpet, Flugelhorn, & Vocals.

CaberSLAAAY
presented by Corkscrew Cabaret
Doors open at 6:30, show starts at 7p
$10 advance $15 door
Awakened at last from our year long slumber, The Corkscrew Cabaret returns just in time to shake off the cobwebs, stir up the bats, and bring our own creepy, kooky and all together sexy spin to this Monsters Menagerie. Join us, for a scintillating, spine-tingling burlesque spooktacular that’s sure to knock you dead!

< Monsters Menagerie
The infamously provocative and uncensored Monsters Menagerie juried art exhibit, is chock-full of grotesque and profane art in a variety of media from local artists. Demented creative works from menacing dark noir fantasies, to monstrous and blood-curdling creations that scream for attention.

Posted on September 28, 2019 by Dana Johnson| Leave a comment 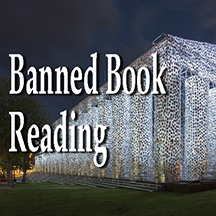 Sister Sur Mon Visage, Mistress of Ceremonies
It’s a very special Adult story time that draws attention to the problem of book censorship, with events like this happening across the country. Join us as a wide variety of readings from banned books. This event is a collaboration with Alwun House and Arzizona LGBT+ History Project.

Posted on September 28, 2019 by Dana Johnson| Leave a comment

Secret Dimensions
A solo exhibit of metal sculptures by Sean T French. Sean creates beautiful and stunning shinning mythical creations. Metallic armour plated entities that create a sense of awe in the viewer. Excellent sculptures to stand proud and guard over your patio.

Art that reflects life experiences the LGBTQ community and friends have endured to gain justice denied. Accepting works in all media that represent that struggle and accomplishment; family photos, weddings, anti-gay protesters, pride, and personal accomplishments.

We are excited to premiere our latest feature film Silver Slipper by Running Wild Films. This film, made in Arizona, was directed by Travis Mills (Durant’s Never Closes), photographed by local cinematographer Jared Kovacs, and features Phoenix-based actress KK Starrs in the lead role along with an ensemble of Arizona talent.

Join us for the debut showing of our new film, meet the cast and crew who made it, and support the ever-growing film industry in Arizona.

Synopsis: Silver Slipper tells the story of Rian, a young woman, who decides to auction off her virginity online. Over the course of the summer after her high school graduation, we follow Rian through this emotional and psychological journey.

DIRECTOR’S STATEMENT
I was inspired to make this film when I read about a website where women from around the world can auction off their virginity. This seemed so indicative of our times and I wondered what the process a young woman goes through to do so such a thing might look like.

KK Starrs appeared in our movie Cornbread Cosa Nostra and she impressed me very much in that one day of filming. The character of Rian was conceived with her mind. She would be in every scene. This would be her story.

From the start, I didn’t want this to be like any film we’d made before. For one, I wanted to play with improvisation more than before. There was no traditional script. Sometimes dialog was sketched out for the actors to work with; other times I set them loose with just a basic idea.

Furthermore, cinematographer Jared Kovacs and I decided to shoot the film in a “new” aspect ratio. The notion came from what a Canadian filmmaker (Xavier Dolan) did with his movie Mommy. Also, the vertical framing seemed appropriate in a film about the smart phone generation. It was thrilling to rethink the placement of our camera with this flipped perspective and fresh images presented themselves throughout the process.

Silver Slipper was created by just a few people, the smallest crew I’ve ever had. Along with a gallery of people who helped us with locations and food, the team consisted of only Jared Kovacs (acting as his own operator, gaffer and grip), Elizabeth Ketchmark (our assistant) and myself (directing and capturing sound with the boom mic). It was an intimate way to work, creating a feature film with practically “nothing”, returning to the roots of Running Wild Films.

Production wrapped in July 2018 and we are now submitting the film to festivals around the world. 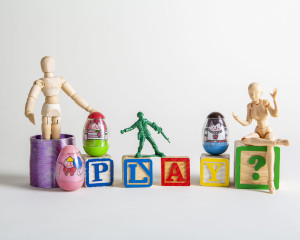 A solo exhibition by photographer
Miachelle DePiano
Duende: Passion Through Play is a transformative body of work by Phoenix photographer Miachelle DePiano. Using color, light, space, form, and reflection, she opens the door to an unexpected dimension of your favorite vintage childhood toys, playfully used to explore her memories, social observations, and personal ideologies.

Join us for a dark cabaret experience! Let us entertain you with an evening of sultry entertainment at this adult-themed cabaret variety show celebrating the unconventional side of sensuality with beautiful dancers, adult comedy, and sexy acrobatic acts!

Our performers are some of the most mesmerizing, highly trained, and incredibly talented ladies you can find!
Best cabaret in the valley!

IGNiGHT!
An Interactive Art Experience celebrates the 10 principles of Burning Man through the art of the Arizona Burning Man community. This month-long exhibit will allow you to interact with a wide variety of Burner art, learn about the culture of Burning Man through hands-on activities, make new connections and explore a world outside of your own. If you’ve ever wondered what Burning Man is all about, join us and get a little closer to the flame! 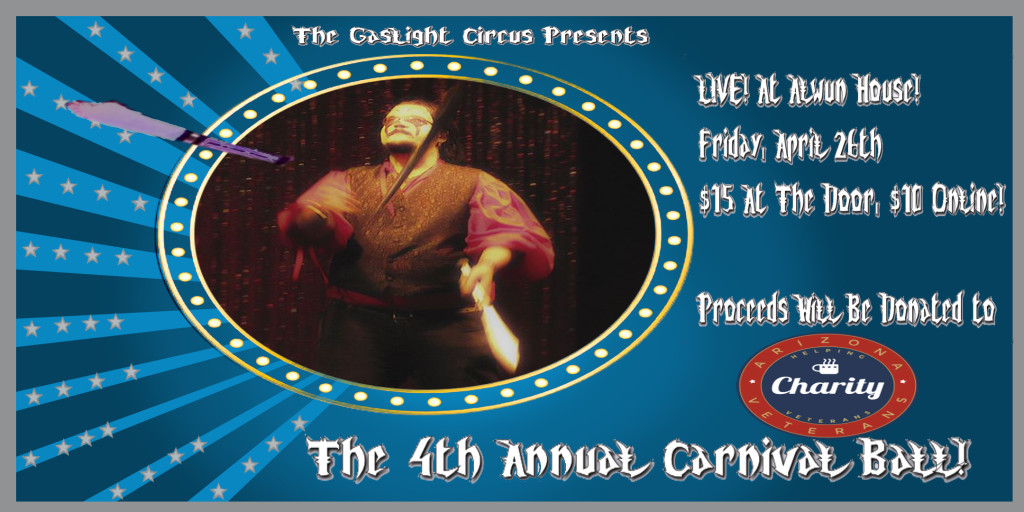 Come One! Come All! To the 4th Annual Carnival Ball!
It’s that time of year again where The GasLight Circus comes together in support of local charity Arizona Veterans Helping Veterans as we put on a show unlike any other just for YOU! You’ll see all your favorite GLC Performers including “The Clown Prince of Arizona” Jero the Jester! GLC Clowns Rubix, Jack, and Talento! The Firey Fury of Techie Hilliker! And many more! The night’s festivities will also include the return of the GLC Carnival! 5 carnival games spread throughout the patio gardens for your entertainment! Tickets available online via Eventbrite, as well as at the door day of show!

Through the darkness of future’s past, we invite you to an evening filled with stand up comedy based on David Lynch’s various works. Fire Laugh With Us. To get to the other side.” Fire, Walk With Us as we unravel a series of extra-dimensional joke, in the hope of unearthing the mysteries of David Lynch‘s really weird stuf

Exhibit: April 19 – May 10
IGNIGHT! An Interactive Art Experience celebrates the 10 principles of Burning Man through the art of the Arizona Burning Man community. This month-long exhibit will allow you to interact with a wide variety of Burner art, learn about the culture of Burning Man through hands-on activities, make new connections and explore a world outside of your own. If you’ve ever wondered what Burning Man is all about, join us and get a little closer to the flame!

The public is invited to witness firsthand the enthusiasm and pride of downtown’s first Elementary School District’s colorful Art Departments and performance programs perseverance in the face of cutbacks in funding.

There will be approximately 300 juried pieces made by students in the 5th through 8th grades, representing 16 Schools, and 18 teachers. Art is displayed Salon-style, and sold right off the wall; including sculpture, ceramics, painting and photography. All art sold for $20 right off the wall, on a first come basis, replaced with yet another piece – with 100% going to the student artist.

One of the exhibit founders, John Avedisian (art teacher), says “the goal was to give students the experience and excitement of a real gallery setting, surrounded by parents, teachers, neighbors and civic leaders. The exhibit rewards months of effort developing positive self-expression.” For many it will be a first time seeing their art on display in a gallery. For others it will be the first time they’ve seen an art exhibit.

Join Silver String Circus for a night of side-show, magic, music, improv, and most importantly DUNGEONS & DRAGONS! Grab those D20’s and your favorite wizard robes, because this rag-tag group of adventurers needs your help on a quest of magnificent proportion! This is a night of nerdy fun unlike any you’ve experienced before. You and your party will be wowed with a circus show full of grace and danger, serenaded by the voice of angelic bards, graced with house libations, and included in the story through improv games led by a professional Game Master… um… we mean, host. As with any good dungeon crawl, you’ll have the opportunity to win some epic loot with our prizes and raffles, or chose something of your own from one of our amazing vendors.

Don’t miss out on this unique experience for gaming and fantasy enthusiast of all ages! Tickets are limited so buy yours while they last!

Phoenix Elementary School District’s Juried Youth Art Show & Sale. There will be approximately 300 juried pieces made by students in the 5th through 8th grades, representing 16 Schools, and 18 teachers. Art is displayed Salon-style, and sold right off the wall; including sculpture, ceramics, painting and photography. All art sold for $20 right off the wall, on a first come basis. 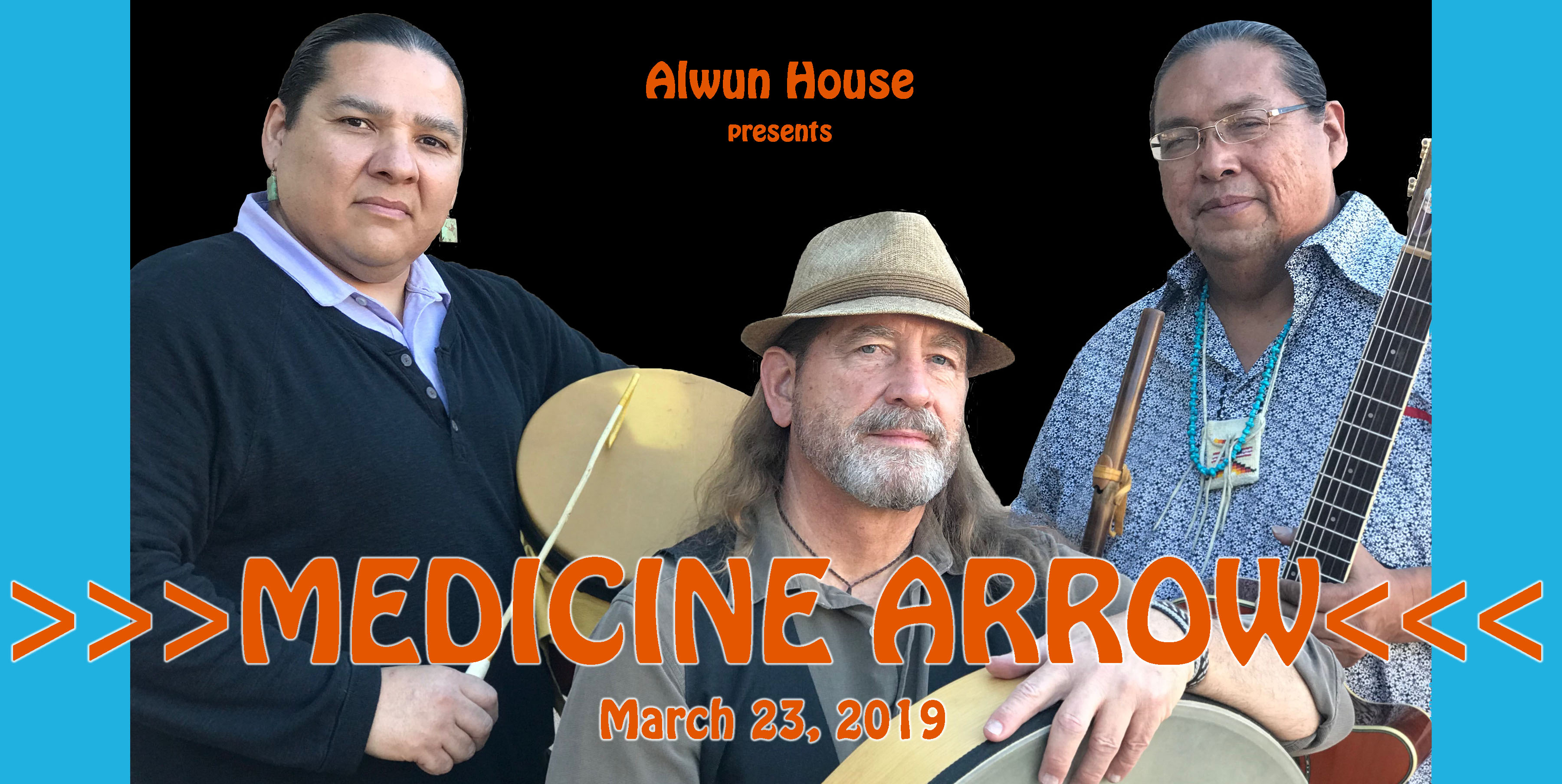 Medicine Arrow is a multicultural and multidisciplinary performance ensemble based in Arizona whose stage is the world. With a sound grounded in the deep traditions of Native America, yet reaching beyond all boundaries and borders to embrace the pulse of the planet and the song of the universe, Medicine Arrow seeks to deliver a message of harmony, balance, equality and integrity through its adventurous blend of music, dance, storytelling, poetry, and mask art.

The core Medicine Arrow trio is comprised of singer, dancer and actor Roman Orona; guitarist, singer/songwriter plus flutist and Native American Flute Storyteller Aaron White; and percussionist, poet and mask maker Will Clipman. In the spirit of creative inclusiveness, these three artists welcome collaboration with an eclectic cast of very special guests, enhancing and embellishing the conversation among voice, flute and drum with elements of theater, choreography, videography and multi-instrumental music.

The unifying metaphor of Medicine Arrow is that which flies straight and true from one heart to another, piercing the illusion of separateness and bringing all together as one. Audiences of all ages will thrill to the exhilarating rhythms, soaring melodies, rich harmonies, lush language and vivacious visual imagery of this joyous celebration, imbued with both ancient resonance and futuristic vision, in which everyone is invited to participate, and from which no one is excluded. 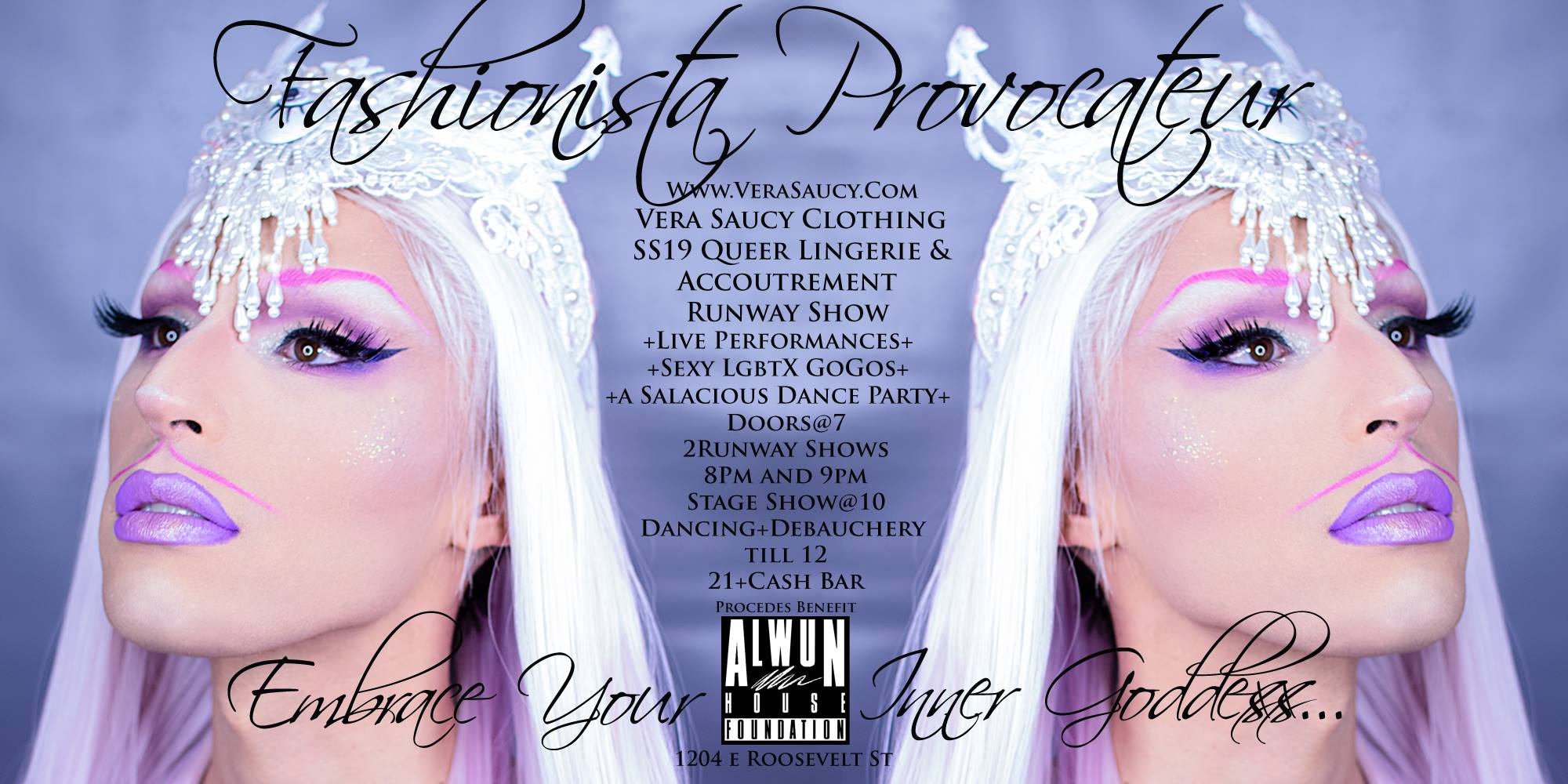 Join us for a dark cabaret experience! Let us entertain you with an evening of sultry entertainment at this adult-themed cabaret variety show celebrating the unconventional side of sensuality with beautiful dancers, adult comedy, and sexy acrobatic acts!

Posted on February 15, 2019 by Dana Johnson| Leave a comment